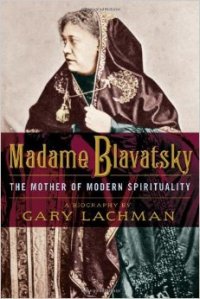 Madame Blavatsky, The Mother of Modern Spirituality A biography by Gary Lachman (2012 Tarcher/Penguin)

Madame Blavatsky, The Mother of Modern Spirituality, is the biography of a woman who died over a hundred years ago and whose name still inspires controversy among people who interest themselves in proofs of spiritual realities that are unexplainable in terms of our material mundane existence.

In other words, she could pull real rabbits out of her hat.

I came to this book from two perspectives. One was as a Muslim who believes in angels, jinn, and the supernatural. In college, I studied Ibn Khaldun, an eighth century (hijra) Muslim scholar, best known for his Muqaddimah or Introduction to History. He devotes a large section to magic. His contemporary, Ibn Battuta, a Muslim version of Marco Polo, reported demonstrations of mind-boggling feats in various lands (like India) similar to situation/events explored in scientific or quasi-scientific TV documentaries that are treated as mysteriously defying explanation.

I found myself wondering what Madame Blavatsky felt her life mission was, and what revelation her abilities made in her own mind. The author, Gary Lachman, is helpful because he examines the vicissitudes in the life of Madame Blavatsky and her alleged proofs of extrasensory powers with an open but cautious mind. His evaluations are made from every angle to the extent of offering possible methods of deception. Until the final page, readers need not feel Lachman is attempting to convert them into Theosophists.

During Madame Blavatsky’s lifetime, a Theosophist would have meant a member of the Theosophical Society. One of the mission statements produced by said society (and which Lachman notes still guides its many branches today) was

1. To form the nucleus of a universal brotherhood of humanity without distinction of race, creed, sex, caste or color.

2. The study of ancient and modern religions, philosophies, and sciences, and the demonstration of the importance of such study.

3. The investigation of the unexplained laws of nature and the psychical powers latent in man.

Blavatsky and Henry Steel Olcott–Civil War Union Officer and later convert to Buddhism whose picture has been on Sri Lanka stamps.

Born in the Ukraine in 1831, Blavatsky had enough romantic drama in her life and soul to fuel a TV series. She was the frail infant of a likewise frail teenage mother, Helena Andreyevna, the latter being daughter to a princess. Blavatsky’s mother achieved acclaim shortly after having her first child through her writing. Helena Andreyevna wrote under the pen name, “Zenaida R-va” and was nicknamed the “Russian Georges Sand” by at least one critic.

Blavatsky’s father was a descendant of German nobility, a captain in the Royal Horse Artillery, later a colonel. He had a traditionally 19th century male chauvinist attitude towards his wife’s “career.” Blavatsky’s grandfather was a governor; she had access to his large library. Lachman tells us that Blavatsky, her mother, and her maternal grandmother were all noted for intelligence and self-education.

The psychological implications of Blavatsky’s family circle are satisfactorily explored. Apart from governesses, Blavatsky had “extracurricular input” from her serf, Baranig Bouyak, an aged healer who could allegedly read the future. At a very young age, Blavatsky claimed a secret friend or protector whom she saw in dreams (and who was probably one of the “masters” referred to in much the rest of the book—all her masters seemed to have been from India).

When she was six, Blavatsky accompanied her mother and maternal grandfather (trustee for the nomadic Kalmuck Buddhist tribes of Astrakhan) on a 1,000 mile journey to Central Asia. The sojourn lasted a year, affording the girl her first contact with Buddhism. Buddhism was the only religion to which Blavatsky ever formally laid claim, much later in life, and even then, it was not in a

Blavatsky’s double life (worldly and inner) began at the age of 16. Her sister, Vera, talked of strange powers Blavatsky evinced from childhood, able to put pigeons to sleep, create knocking sounds in whatever vicinity she was in, or make pertinent objects materialize. These supernatural parlor tricks were at first prolific with the young woman, but later she showed increasing reluctance to indulge requests, saying that they were distracting to her purpose—and the purpose of her secret “masters.”

Blavatsky wrote two massive books: Isis Unveiled and The Secret Doctrine. She saw manuscripts in the air, which she had to read backwards. These were her references and account for her horrible punctuation.

Blavatsky’s travels through Cairo, Syria, Palestine, and Lebanon brought her into contact with Muslims including the Islamic reformer Al-Afghani. Of course she was familiar with Christianity. While her life purpose seemed to have been emphasizing the fact that spirit matters more than the body, there is no clear demonstration in this biography that she held out any spiritual benefits to her followers or that she believed in God.

Lachman tells us that the “masters” were angry with Blavatsky towards the end of her life for sharing too much special knowledge with crass Westerners.

The reader may wonder how the “masters” were not able to predict this dissatisfying outcome. They could have avoided wasted effort in guiding and protecting her.

In my exploration of self-published titles, I have come upon a gem: Inside/Outside. This memoir, by Jenny Hayworth, tells the tale of a woman who comes from a long line of sexually abused children in a family/religious community that refuses to acknowledge sins among men (heads of household). No doubt there are exceptions, but her life story demonstrates the pressure that is brought to bear upon victims in the Jehovah’s Witness society in which she was raised. She left the cult and was dis-fellowshipped, which means everyone who meant anything in her life, her friends and family, mother and father, was forced to ignore her existence as if she was dead. This castigation brought on seriously health-destabilizing stress issues for herself and her children. I highly recommend this book. It is gripping, informative and helpful in drawing parallels. Hayworth is a good writer and she knows how to deliver her story.

If you have ever wondered what goes on behind the scenes with the Jehovah’s Witnesses who knock at your door, this book may bring a little light. They are a society like any other, and among the more rigid.

Yet contrary to what the reader might expect, Inside/Outside is by no means a condemnation of religion, but rather of human ego and intolerance. It is an insightful reflection into one woman’s experience of the chaotic pain wreaked by unreasoning control that is enforced in the name of any kind of dogmatic system. Hayworth’s subsequent acknowledgment of kindness from followers of all types of spiritual systems demonstrates her keen powers of rationality. She has been through much and her story, though dark and powerful, has light at the end. It is a commentary on the human situation and the struggle for the guise of superiority, no matter what banner society flouts. I cannot say enough good things about it.It is available on Amazon.