Almost anyone who can read and follow the directions for formatting on Amazon Kindle or Smashwords can publish nowadays, if online publishing serves a writer’s purpose.

When is publishing one’s own work a good idea?

In many cases, self publishing, especially electronic (which is free) can be a good idea. It is a good idea when an author has written a good book that he or she would like to make available for purchase or distribution (there are cases in which electronic publication can result in free distribution, as during certain promotions undertaken by Amazon) .  Making a work available through an electronic publisher like Amazon is beneficial to an author working to consolidate a platform because that work will appear during  searches on the author’s name or on certain tags.

The work will be findable should the author suddenly die.

If  a writer’s work has been undertaken for more than just money, that latter point can be  important.  However, it does not matter how findable any work is that is not also good.

Good means readable, enjoyable, or interesting.  It means that there are people on earth who, should they start reading said work, will like it.

Last week I uploaded my play,  The Jinni in the Clock, to Amazon. I wrote it  when my eldest son was about 12 and his little brother, Omar, was 4. I wrote it because we lived in Saudi Arabia and the chances of my children  ever participating in a school play were nil.  I invited the children of my American and British friends (ladies married to Saudi husbands) to come over and rehearse. The kids had a blast, their mothers were the best directors /set and costume designers/stagehands imaginable, and all  involved retain a fondness in their hearts for the tale of the genie-infested clock that passed from owner to owner  in long ago Moorish Spain.

Now both the play and my collection of stories are available on Amazon Kindle.  However, I do not intend to sell all my work this way. My first four books were published by a U.S. publisher and later by a Gulf Arab publisher. I made less money but earned credibility by publishing traditionally.

Every serious writer must endeavor to earn and  hold onto credibility–not always easy to do. (Writers have been known to write a “bad” book after a “good” one.)

The reading public counts on the editors at publishing houses or magazines to sort out the readable from the unreadable.  Electronic publishing is not going to change this process.  The serious writer must attempt to establish credibility by submission to editors, such as our friend Ron Samul at Miranda (see blogroll) who is currently seeking high quality novellas for his online magazine. When an editor with a background in literature feels a work is good enough to be displayed to the world, readers are encouraged to give that work a few minutes–or hours–of their time.

From time to time, Julia and I will use this space to publish writing-related posts by guest bloggers. Today’s guest is Lesley Kellas Payne. Julia and I both know and respect Lesley as an incredibly talented freelance editor. We have worked with her in critique groups and various other activities around Fresno. For me personally, Lesley has proven invaluable as a friend and editor over the span of 25 years; I would not be the writer I am today without her moral support and keen editorial eyes.

Lesley has recently developed an online course for writers looking for personal, one-on-assistance and/or feedback about their writing. Please see her post for details below.

I don’t think I could even estimate the number of times I have heard someone say: “I’ve always wanted to write.” “I could do better than that if I just tried.” “I’ve thought of myself as a writer since I was a kid.” “I wanted to write but Ms. Seventh Grade Teacher told me I’d never be able to spell.” “But how could I ever earn a living.” “I just can’t face going out again for a class once I get home from work.” “I like to just stay around the house on the weekends.” In contrast, I heard years ago a story about an amazingly successful romance writer who had a bevy of kids and typed her novels standing up with her typewriter rocking and rolling along on top of her washing machine—or was it the dryer?

I have developed a six-week online, one-on-one course to respond to folks much like myself who lack the hyper-drive to write best-selling novels while knee deep in household chores and the needs of several small beings. Finding the Writer Within is a program for those who want to clarify what they want to write and in what form. It includes writing exercises and other practices, such as silence and observation. By the end of this tutorial, each individual will have a clearer sense of the value, appropriate form and meaning of writing in his or her life as well as the knowledge of how to establish practices to meet writing goals.

Please visit my website and blog at http://www.lesleykellaspayne.com/ for more information or email me directly at lesleykp@comcast.net.

After Ossama Bin Laden became infamous for being the head of Al Qaida and promoting hatred of and war against America, I reflected with a turning stomach that I must have passed him, by car, probably many times in Saudi Arabia. We all lived in the same city, Jeddah, for many years. The rest of the Bin Laden family lives there still when they are not in America or Europe.  (They  put a lot of effort into distancing themselves from Ossama in the wake of his atrocities and monstrous role in the terrorist world.)

It makes me shiver to think how close I have been, unknowingly, to terrorists, yet that is life.   You never know who you’ll run into or be associated with, unwittingly,  anywhere on earth.

In Jeddah,   my ex husband once took our only son at the time to a small local grocery store, and when he came back, exclaimed to me, “Guess who we saw!”

“Idi Amin. He was in the vegetable section.”

We are all close to saints and devils; we might pass them every day, and maybe we help create a few.

Ever since the first text message came on my phone, with the words, “Ossama is dead!” I have been thinking about what Ossama Bin Laden meant to me.  He represents a repressive, oppressive, tunnel-vision version of Islam that relies heavily on lack of reading from its followers (by “reading,” I am talking about reading widely and understanding, not just memorizing one book without reflection).   As an American Muslim, I have been under the impression that Al Qaida–without making any clear declaration–wants the rest of the world to convert to Islam, at which point, presumably, it will let the world (but mainly its target, America) live in peace.

Sometimes people have asked me, “How can you still be a Muslim, given what you know and what is happening in the world?” My answer is that I am not willing to abandon my faith–no more than I would my family or country–because others who share it behave like demons.  However,  I would be remiss not to comment.

I do not believe Al Qaida itself is aware of its own true motivations, none of which are spiritual.  It would take calm thinking–developed by wide reading and practice of critical reasoning–to be aware of the motivations that trigger any human being into good or bad action. Such thinking must be as  devoid as possible of egotism or identity complexes.

Jealousy, hatred and greed motivate individual tyrants and tyrannical groups alike. Tyranny is based upon squelching of human life and human needs without diplomacy or tolerant compromise. It is unthinkable that any person or group wallowing in such acts could have anything to do with spirituality, which by definition identifies with denial of self (i.e. all catering to the self in the realm of the material or ego, which would naturally abolish jealousy and greed–thereby eliminating the most robust seeds of hatred).

Terrorist groups may pretend to declare war on capitalism, materialism, and godlessness, but it is nothing but lip service.  Terrorist leaders count on the fact that lack of dialogue and reading has murdered the ability to reason among their followers–those who still think that Al Qaida or the Taliban have anything to do with the spirit. 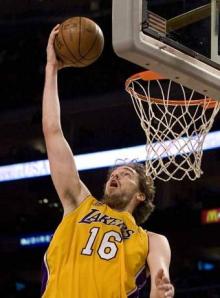 Here today, gone tomorrow. What have you done for me lately?

A day after the Lakers were swept by Dallas in the Western Conference semis, a great number of Laker “fans” are calling for Pau Gasol’s head. The same Pau Gasol who proved the missing piece after Shaq left, the Robin to Kobe’s Batman, the guy who helped lead the team to the NBA Finals for three straight years, winning it all the last two. The mild mannered Spaniard couldn’t duplicate his performance this year, so he quickly fell out of favor with the so-called faithful. I know these fair weather fans won’t listen, but the fact is that no one, including my favorite most admired sports star on the planet, Kobe Bryant, played as well this year as in previous seasons.

Angry fans want someone to blame, but the simple fact is the Lakers are a tired team. Over the past few years, they’ve played so many more games than most teams via the playoffs that it amounts to nearly an extra season. At 32 years of age, Kobe has a lot of miles on his knees. And while it’s obvious he still has the burning desire to win, his body just can’t do the things it once could. As a result, he isn’t able to go out and score 60 points on any given night, single-handedly willing his team to win. Mind over matter, you say? Ah, if wishes were dreams.

Nothing lasts forever. We Laker fans were treated to a great run over the past three years. There are millions of basketball fans who’ve never seen their team make it to the Finals let alone bring home the trophy. Of the 30 teams currently in the NBA, fourteen have never won a title. The Lakers, meanwhile, have 16 Championship banners hanging in the rafters at Staples Center.

That’s not to say there isn’t room for 16 more. The Laker franchise knows how to win and it will win again. We will catch Boston, and Kobe will tie or surpass Michael. Meanwhile, let’s take time out to say thanks to our guys rather than request their public flogging.

Thank you and good night.