When I was a child, I loved the stories that best celebrated the traditions of my culture, like A Christmas Carol by Charles Dickens.  How surprised I was to find, after converting to Islam and marrying a Saudi, that there was precious little for the children of the Muslim world, and even less for those reading in English.

So I started writing with children in mind, though like most writers, I have tended to bounce back and forth, writing for adults as much as for young people.

I was thrilled when American Trust Publications picked up my first book, The Four Daughters of Yusuf the Dairy Farmer. The editor-in-chief at the time encouraged me to go on writing about the traveling water carrier named Duwairig, who told stories to children in every town he passed through.

The narrator in my books  is named after a real man who lived in Jeddah many, many decades ago.  My Saudi relations told of this man, named  Duwairig, who carried large clay pots of fresh water on his back up the many flights of stairs to the top of the houses. There he poured the water into the rooftop containers that supplied water to the entire house.  Obviously people had to be careful with water and not take the long showers that we take today. Nonetheless, they had pipes running down from the rooftops and could turn on taps in any given room with a sink.

After The Four Daughters of Yusuf the Dairy Farmer, I wrote The Princess Who Wanted to Be Poor, a story that may not be quite what the title implies. Sometimes being rich is a hindrance, especially if one is a princess whose sole wish is to ride a beloved horse and not have to listen to silly vain people.

Realizing how much people love magic, I wrote The Jinn in the Clock.  This story takes place in Muslim Spain, a land whose history I studied and later wrote about for the Saudi Broadcasting System, English Service, in a program called “The Lights of Al-Andalus.”   The Jinn in the Clock is about a genie hidden in a clock and how he affects people into whose possession the clock comes. A play has been written based on this book, which should be available on Amazon Kindle by the end of summer, 2011. (I shall retitle the play The Jinni in the Clock since “jinni” is singular and “jinn” is plural for genie and genies, respectively.)

At almost the same time as I wrote the genie book, I wrote A Wicked Wazir, which is about a good king, his three sons, and an evil counselor. It takes place in Muslim India. A group in Saudi Arabia called WAMY( World Association of Muslim Youth) once professed great interest in this story and asked me to write a screenplay, which I did (or at least 100 pages of one).  Quite suddenly, I was informed that WAMY had opted to fund an Islamic version of Mutant Teenage Ninja Turtles instead of my book, and besides, they were not interested in fairy tales taking place in India.  The screenplay was shelved. 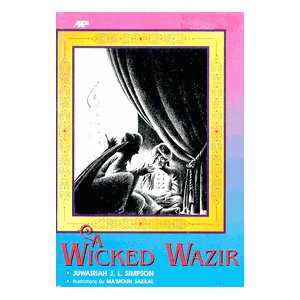 I was most fortunate that American Trust Publications assigned the artwork of the latter two books to Ma’moun Sakkul, a very talented artist from Seattle, Washington.

When my oldest son was going to school in Saudi Arabia, and I saw the sorry quality of the English-language children’s books and pictures used to teach English, I sent my books to the Ministry of Education, asking them to consider using my books for teaching upper levels of English.

About a year later, I received a letter telling me to “keep up the good work.”

In the spirit of sharing, I have made The Jinni in the Clock, a children’s play set in Moorish Spain, which is the inner story told in The Jinn in the Clock, available on this blog. You are free to copy and print out the play if it pleases you. Find it by going back to Home and scrolling down the right side. Peace~!